at St. Ignatius Church
This event has passed.

Trumpeter and singer Paul St-Amand has earned raves for his lyrical sound and expressive singing voice. His band Blue Spirits received a 2017 Music Nova Scotia Award nomination for Jazz Recording of the Year, and he performs regularly with his Trio/Quartet and a variety of duo partners. He is also a member of the popular Latin ensemble Son Latino. Paul has recorded with a variety of rock, pop, jazz, and soul artists, including The Stanfields, Corey Isenor, Arsoniste, and Roxy & The Underground Soul Sound. Also an accomplished classical player, Paul is a founding member of the Bedford Brass Quintet.

Guitarist Georges Hébert is a veteran performer and producer. He was Anne Murray's guitar accompanist for 30 years, and performed on television and radio shows like Sing-a-Long Jubilee and Denny's Show. Georges has released five albums as a bandleader, and produced albums for many other singers and instrumentalists. He is a longtime resident of Bedford, where he maintains a music studio.

Bassist Ronald Hynes is another in-demand Halifax musician, performing and recording with Jimmy and Heather Rankin, Wreckhouse, Ben Caplan, Donald MacLennan, and many more. He performs weekly with Silvio Pupo and Damien Moynihan at The Local's popular jazz night. In 2017 he was voted Musician of the Year by Music Nova Scotia. Originally from Newfoundland, Ron is a graduate of the jazz studies program at St. Francis Xavier University.

Andrew Miller is an award-winning drummer, composer, and teacher. A graduate of the University of Toronto, he is a recipient of the TD Stingray Rising Star Award and the Buddy DeFranco Outstanding Jazz Soloist Award. He leads his own trio in Halifax featuring his original compositions, and has also performed with Port Cities, Michael Formanek, David Liebman, Brad Roberts (Crash Test Dummies), Jimmy Rankin, Phil Nimmons, and many more. Andrew has a busy private studio in Bedford.

Carolyn Curry holds a Master of Music in Jazz Performance from the University of North Texas, and often features as a performer and Musical Director at Grafton Street Dinner Theatre. She performs regularly with the alt-rock Cyrus R.O. Quartet, and the popular ABBA tribute Dancing Queen. 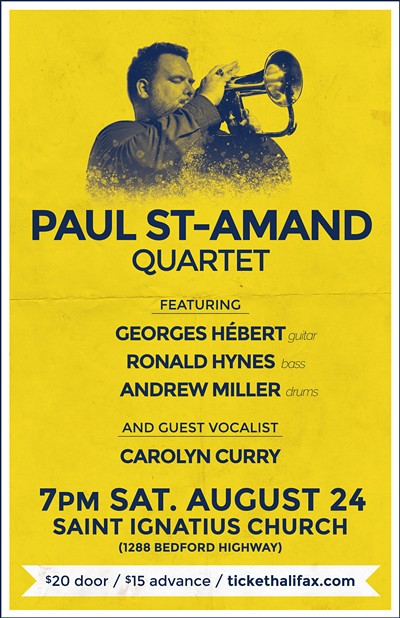