A Q&A with Joaquín Cociña will follow the screening

A secretive German settlement that thrived during Pinochet’s reign of terror in Chile, the real-life Colonia Dignidad hid plenty of unsavoury secrets beneath the guise of a wholesome community. The animated The Wolf House doesn’t tackle the horrors inside the colony head on but uses them as a launching pad for a surrealistic fairytale in which the Brothers Grimm meet David Lynch.

The story follows María, a teen who runs away to avoid impending punishment. With a wolf hot on her heels, the girl finds shelter in a house that changes shape at will. The place seems abandoned, except for some pigs that Maria believes she can mould into children, a decision she soon comes to regret. That the film goes on to suggest the fairytale is a tool created by the higher-ups at Colonia Dignidad to prevent children from escaping adds an extra layer of horror to the proceedings. 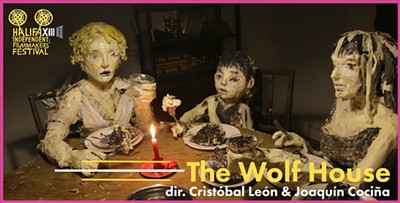