HIFF is thrilled to present a retrospective of experimental short films from director Konstantina Kotzamani, one of the most exciting voices to emerge from the “Greek Weird Wave.”  HIFF will be screening three exceptional selections from Konstantina’s uncanny and eerily beautiful world.

Konstantina will join us for a Q&A following the screening, via videoconference.

A group of children discovers the carcass of a whale that has been washed ashore.

A boy and a girl meet in club ’s toilet. High on drugs, they walk the streets of Sarajevo aimlessly. They end up in an apartment, fooling around, making out. Until this careless atmosphere is interrupted by someone else’s presence.

Konstantina Kotzamani was born and raised in Greece. Her short films have premiered in major festivals such as Cannes, Berlinale, Locarno and have received numerous international awards. For her short films Washingtonia (2014) and Limbo (2016), she has been twice awarded by the Greek Film Academy with the best short film award and twice nominated by the European Film Academy for the best short of the year (EFA award).  Her films have been sold and broadcasted in European channels such as ARTE, FRANCE TV, in Asia and USA and have been distributed on platforms like Criterion, MUBI etc. Konstantina, beneficiary of the Onassis Foundation Scholarship recently spent a year in Buenos Aires in order to develop her first feature film script, Titanic Ocean, in collaboration with UCINE (Universidad del Cine de Buenos Aires) under the supervision of the tutor Agustin Mendilaharzu.  Her short films have been the theme of retrospectives in festivals like BAFICI, Go SHORTS, Festival du Nouveau Cinema MONTREAL, AMIENS FILM FESTIVAL, Mecal Barcelona Film Festival etc, while she has been invited as a jury member in multiple short film festivals. Her last short film Limbo was qualified for the short films Oscar nomination in 2017. She graduated with a degree in Film after completing her degree in Pharmacy. 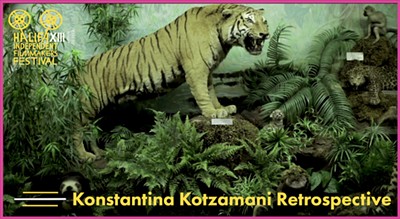