at St. Mary's Basilica
This event has passed.

The King's Chorus’ fifth annual tribute to the patron saint of music features one of Joseph Haydn’s great masses, the Missa in Angustiis (“Mass For Troubled Times”). Nikolaus II commissioned the composition to celebrate his wife, Princess Esterhazy, on her name day in 1798. Rather than being delightfully celebratory, however, it expresses the anxiety that was weighing down on Europe in the threatening wake of Napoleon’s numerous victories. While Haydn wrote the mass during these tumultuous times, shortly after its first performance, exciting news came from Egypt that Lord Horatio Nelson had won a great victory over Napoleon’s French fleet at the mouth of the Nile on August 1, 1798. Haydn’s work thus adopted a nickname, The Lord Nelson Mass, a masterwork that is at once deeply sorrowful and movingly jubilant. The program will also feature Parry’s exultant and majestic anthem, “I Was Glad,” Mozart’s tenderly sentimental Ave Verum Corpus, as well as a dash of Gregorian chant composed by Hildegard. The Chorus’ well-tuned voices will join with the heartfelt sounds of Ensemble Regale Orchestra to present a memorable evening of song.

The King’s Chorus is a choral society of the University of King’s College comprised of sixty students, faculty, staff, and community members. They rehearse major choral works from various traditions and perform a concert each semester. It is committed to fostering a supportive environment where singers of all levels can improve their musicality and enjoy themselves in the process. The Chorus’ annual St. Cecilia concert has been hailed by audience and critics alike as one of the highlights of Halifax musical life. 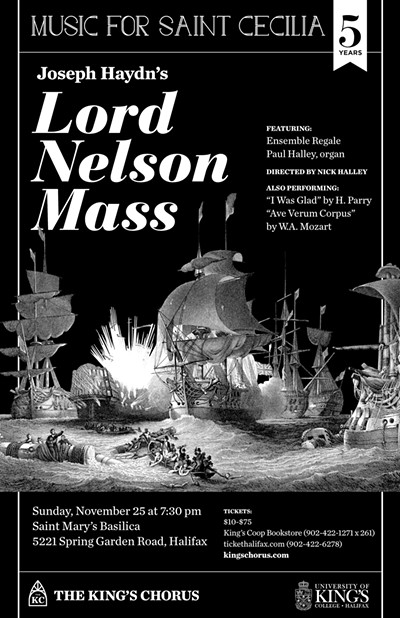