at St. Ignatius Church
This event has passed.

Paul St-Amand is known for his lyrical trumpet sound and expressive singing voice. He's a member of the popular Latin ensemble Son Latino, and has performed with many of Halifax's leading jazz, funk, and soul musicians. With his band Blue Spirits, he received a 2017 Music NS Award nomination for Jazz Recording of the Year. St-Amand is also a founding member of the Bedford Brass Quintet; the ensemble was voted among the top three classical artists in Halifax by readers of The Coast in 2015 and 2016.

Silvio Pupo is a wizard on the piano, and one of Halifax's busiest musicians. He performs frequently with Three O'Cubano, and plays a weekly residency at The Local with Damien Moynihan and Ron Hynes.

Bassist Ron Hynes is another in-demand Halifax musician, touring and recording with The Rankin Family, Ben Caplan, Donald MacLennan, and many more. When not touring, he performs weekly with Silvio Pupo and Damien Moynihan at The Local's popular jazz night. In 2017 he was voted Musician of the Year by Music Nova Scotia.

Drummer Brendan Melchin performs with Roxy & The Underground Soul Sound, one of Halifax’s most popular R&B bands. He is also a member of Transatlantic Zodiac Ensemble and Superfluid, and leads his own modern jazz group The Forward Bound. 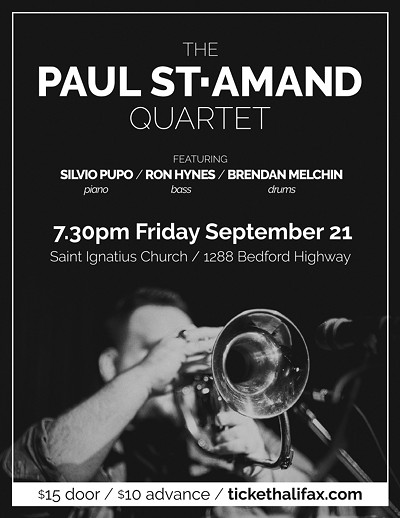