The Coast presents An evening with Scaachi Koul

Scaachi Koul presents One Day We’ll All Be Dead and None of This Will Matter, her debut collection of alternately biting, hilarious and touching essays about growing up the daughter of Indian immigrants in Canada, "a land of ice and casual racism.”

Koul was born and raised in Calgary, Alberta, and is a culture writer at BuzzFeed. Her writing has also appeared in The New Yorker, The Hairpin, The Globe and Mail and Jezebel. One Day We’ll All Be Dead and None of This Will Matter is her first book. She lives in Toronto. This is her first appearance in Halifax.

"Anyone who follows @Scaachi on Twitter knows that not only can she back up her dry wit and sass with fierce intelligence and touching personal narrative, but mama also don't suffer no fools. Her essays are smart, intimate and very funny (as you would expect), tackling subjects like sexism, casual racism, feminism and familial obligation in the same breath as she recounts once getting cut out of a skirt while shopping or details on how many parts of her body she practices hair removal (spoiler: A lot). Move over Lena, Koul is the real voice of our generation." 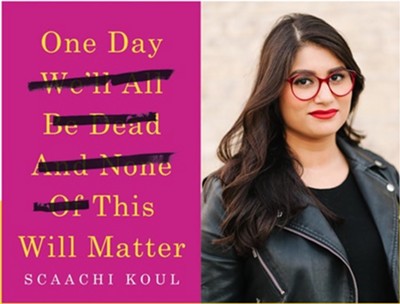