at At Home on your viewing device
This event has passed.

Brian Borcherdt, Kim Barlow, Mairi Chaimbeul, and Sahara Jane have developed unexpectedly into a new musical entity while they’ve been improvising in the old Catholic church in Canning, NS these past months. The music they are making on harp, electronics, banjo, guitar, and sarangi, is different from anything they have done before in their other projects, and they are all thrilled to bits at the discovery.

Mairi Chaimbeul is a harpist from the Isle of Skye who teaches at Berklee School of Music and has toured with Darol Anger as well as her prog-trad band the Aerialists.

Kim Barlow is an enduring presence in the Canadian indie-folk scene, with classical training and a longtime love of odd forms and improvised music. Kim received a grant from Canada Council for the Arts to run a series of improvised music concerts and workshops in Wolfville this year, which has led to many new collaborations and morphed into this ensemble.

Yarmouth-raised Brian Borcherdt fronts the international touring band Holy Fuck, making electronic music with an expanding array of found objects and pawn shop finds. After fourteen years of touring, with highlights such as Lollapalooza, Fuji Rocks, Coachella (twice) and the aforementioned Glastonbury (three times) as well as support tours with MIA, Hot Chip, and Wolf Parade, Borcherdt returned to Nova Scotia to rediscover the musical roots of his youth. He is currently still working with Holy Fuck but has turned his attention towards new projects, mentoring, and producing as well as remaining active with his solo project Dusted, and now this.

This event is part of Open Waters Festival 2021- a festival of New Music on line. Click here to purchase series passes or see more events. 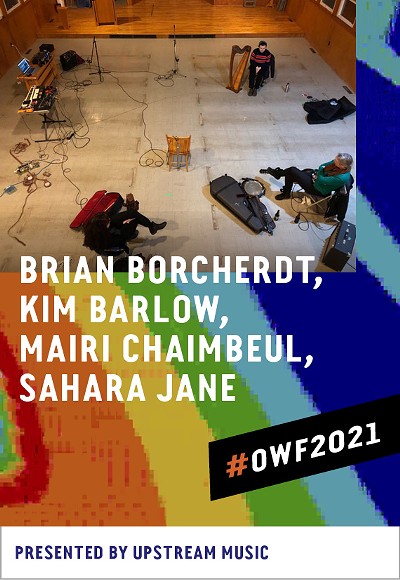 At Home on your viewing device