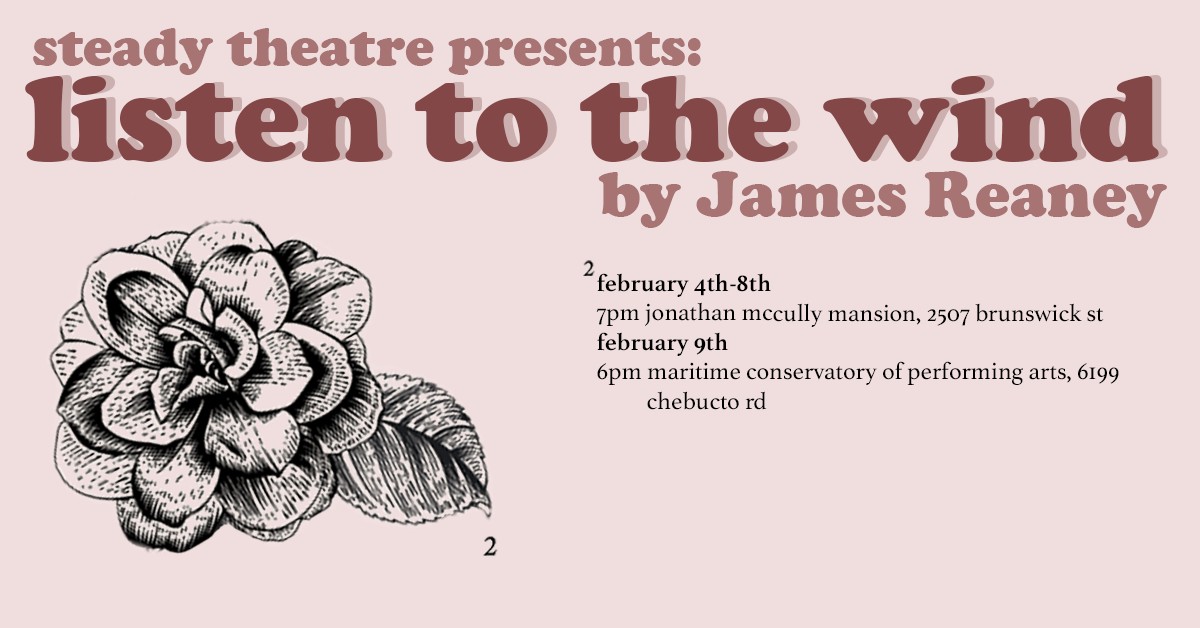 Listen to the Wind

Do you remember the first house you ever lived in? What made it special? Did it have a laundry shoot which your stuffed animals careened down? Was there a vent you whispered through? Was there a door too small? A window at the right height for sneaking out? A ladder to nowhere?

Join Steady Theatre for an experience unlike any other. From February 4th-9th be a kid again; catch our production of James Reaney’s Listen to the Wind. Taking place in the restored Jonathan McCully Mansion (and one special performance at the Maritime Conservatory), this is an immersive and intimate experience that calls audiences to witness the dreams, the losses, and the imaginative delight of childhood.

Ann, Jenny, Harriet, and Owen are putting on a play. It’s the summer of an unspecified year in Perth, Ontario (probably the year you turned 12). The four are a blithe company— young and capricious. They dream and play well beyond the limits of themselves and each other, the bodies that they find themselves in, and the home that has become their playhouse.
We begin our play as the four mount an ambitious production of the fictional Victorian novel The Saga of Caresfoot Court. The children (with the assistance of the “grownups”), play with and explore the big-adult-feelings and ideas of Victorian melodrama.  In the reversals of fortune, betrayals, and various poisonings of Caresfoot Court, the children and grownups alike find a way to sort through their own private and public dramas.
The play, with lightness and grace, explores themes of death, love, family, separated parents, and nostalgia for our childhood dreams and aspirations. Come relive the memories of when summer days felt impossibly long, and August slipped away too swiftly, when “four chairs [could] be anything.”

And, so, the details:

The show has limited capacity.  Our productions February 4th-8th begin at 7 PM, at the Jonathan McCully Mansion.  The show on the 9th takes place at 6 PM at the Maritime Conservatory for the Performing Arts.

On the length - Perhaps nothing can explain better than an excerpt from James Reaney’s production notes:
“The play is long. The first act is 45 minutes; the second act, 55 minutes; the third act, 30 minutes, O.k. Help us make a possible beginning for something new and very much our own - listen to the wind. It’s long, o.k., but so is the wind.”

On that note, refreshments will be provided in between both acts during the two 10-minute intermissions in our lobby.
While this is a play about childhood, there are some mature themes. We suggest ages 12 and up for this production.

Audience members have 2 choices of beautiful historic venues in which to enjoy Listen to the Wind: the Jonathan McCully Mansion and the Maritime Conservatory. Please see below for accessibility features of both venues.

Steady Theatre’s production of Listen to the Wind is an event not to be missed.

This site was built in 1857 in K’jipuktuk (Halifax), Mi’kma’ki, (the ancestral and unceded territory of the Mi’kmaq People.) This territory is covered by the “Treaties of Peace and Friendship” which Mi’kmaq and Wolastoqiyik (Maliseet) People first signed with the British Crown in 1725.

The Jonathan McCully House is an elegant two-and-a-half storey Italianate-style, stuccoed townhouse on a narrow urban lot in the North End of Halifax, Nova Scotia.
The McCully Mansion was designed to have all the hallmarks of an opulent urban townhouse, complete with elaborate moldings, marble fireplaces, grand staircase, and ornate ironwork fencing.
Our lobby will be located just inside the front door in the formal parlour room, which will feature live piano music.

A National Historic Site, it was the residence of Jonathan McCully from 1862 until his death in 1877. Born in Cumberland County, he was a senator, supreme court judge, and a Father of Confederation. As a theatre collective, we recognize and want to acknowledge the continued harm and genocide of the Indigenous communities across Canada as a direct result of Confederation and the colonization of this unceded territory. To ignore the history of the building and one of the original residents is to ignore the history of our community, our ancestors, and the crimes still being committed against the land and the Mi'kmaq people.

About the Maritime Conservatory - 6199 Chebucto Road

Located in the former Chebucto School: In 1864 the provincial government passed the Education Act, making it compulsory for all children aged eight to fourteen to attend school. This act slowly put pressure on Nova Scotian communities to establish schools or to enlarge existing schools to accommodate more students. The Chebucto School was built in K’jipuktuk between 1908 and 1910 to accommodate the increasing number of children living in the North End. The school closed in 1975 and presently is home to the Maritime Conservatory of Performing Arts. To be noted: Chebucto is the french spelling of the word K’jipuktuk, the traditional Mi’kmaq name for Halifax, meaning ‘Great Harbour’.

The Jonathan McCully Mansion is not a wheelchair accessible venue. Audience members will climb 2 sets of steep staircases in order to reach the performance space.

Audience members will move twice during the performance to different rooms in the McCully Mansion.

The venue space is very intimate - audience members will be seated in close proximity. Seating availability is limited with seating options being folding chairs and stools.

The Mccully Mansion is a historic venue with limited light sources.

Accessibility Features of the Maritime Conservatory-

There is an accessible entrance to the Conservstory on the West side of the building, located off the parking lot on Chebucto Road. Volunteers will be stationed at this entrance (30 minutes prior to showtime) to direct audience members upon their arrival.

The performance at the Maritime Conservatory moves through rooms on 2 seperate floors. There is a small elevator (measuring 5 Feet X 3 Feet 2 Inches) which connects the floors. This is a slow moving, hold to operate elevator, which will be manned by a volunteer usher (30 mins) prior to showtime and during performances.

Washrooms on site are wheelchair accessible and single stall.

We at Steady Theatre would like to make the performance as welcoming as possible for our audience. If you have any questions or if there are any ways we can better meet your access needs please contact us prior to the performance at steadytheatreco@gmail.com.

*** If for any reason the cost for tickets is prohibitive, please reach out to steadytheatreco@gmail.com**** 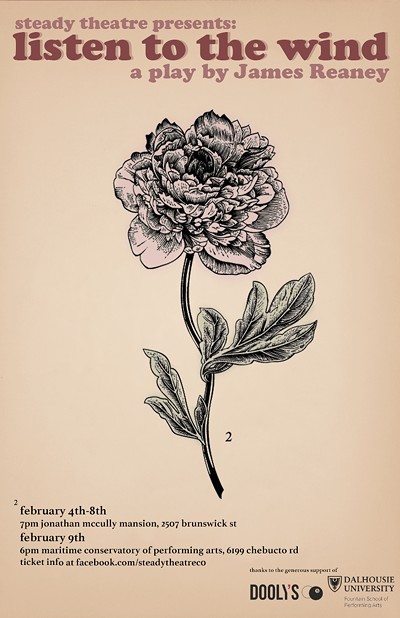